I am a failed actress. Among other failures. This one I am fond of because it taught me how to love good acting. Which I could not do. Some of the best actors I have seen in recent years have been associated with The Pig Iron Theater Company and The Foundry Theater. I am on their email list and I show up. Wherever. Whenever. As long as I go by subway. NYC subway. 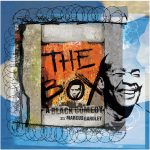 epic poetry about the national tragedy called The Black Man, THE BOX: A Black Comedy.

“Welcome to Prison!” five splendid actors chanted and then told us stories about what happens when you are poor and …black.

I could not stop thinking back to another great epic about The Black Man, the 1999 American comedy-drama film directed by Ted Demme, and starring Eddie Murphy and Martin Lawrence, called Life. But The Box is more ambitious. The Box is a beautiful meaningful rap. It’s poetry. It rimes. It makes you laugh and cry because it is hilarious and bleak. It is very sad. It is so sad that it becomes unbelievable and thus funny. How can we accept the tragedy we see around us: the incarceration of black men upon black men? It must be acceptable, or at least laughable because we accept it.

And so we learn about things we knew but somehow ignored. We learn about the tragic relations of Daedalus, the father, and Icarus, his son. What keeps them alive and maybe bring them closer. The very fabric of their tragic life: poverty and illegality of drugs which seem to sustain America – the suburbs afloat and the blacks in prison.

The direction, music, choreography, set, everything was perfect. But the performance was outstanding. Sheldon Best,   Leon Addison Brown, Jonathan-David, Mikeah Jennings, and Andrés Munar worked real magic into the night.

Tickets are still available. The run is scheduled to end on May 11. I’m sure it will be extended.

The Box: A Comedy about Black