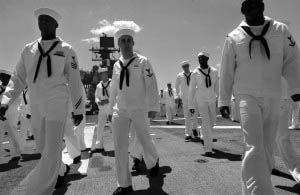 In 1995 I had my first encounter with Fleet Week.

For almost a year I had been acting in plays off-off Broadway and taken acting classes in NYC, at the William Esper Studio, then located in the east twenties, forging friendships which will last a lifetime. Amy, was my best friend. Like me she was an immigrant in NYC. Unlike me, she was legal. She felt comfortable making a living as a waitress until Fickle Fate would give her a break and then Amy would be a full time actress. I did not feel comfortable making a living off the generosity of strangers who, if they like you, tip well enough (20-25% of the bill) so you could make a decent living in NYC. Not that I was more comfortable living off my boyfriend – independently minded until very recently I had made a living teaching in a university, so you could see the discomfort, or maybe not.

Anyway, Fleet Week 1995 comes and Amy cannot bartender perhaps the busiest Saturday evening of the year. Especially in a gay bar in Chelsea. She calls her best friend, me, and asks for a favor:

Dana, could you tend the bar tonight?

Amy, I have never made a drink in my whole life (long enough to include almost 27 years by then).

Don’t worry. I have a cocktail manual behind the bar and all you need is your smile. Everybody is pretty drunk by the time they come to us.

Us were the Chelsea Club, once a purveyor of a vibrant gay night scene, and where I had been a newly added Friday Cocktail waitress.

The General will be there and help if necessary.

The General was the owner. I loved calling him the Generalissimo, because of his Italian accent and love of military uniforms, not of his love of both genders. Talk about a nice sense of humor. He adored everything young and old and made sure that if you needed some money he would make work come your way. And there was plenty, according to your choice! Drugs, sex, waitressing, barista, coat checker, anything really.

I always wanted to write about the Generalissimo but never found the reason. Tolerance? He was Mr. Tolerant. His latest wife was a cute Island girl who made a point in telling the new comers to the bar, she spent all her nights getting ready for the Saturday Night Live, based TV show.  Everybody knew that sometimes she was an extra on that show, and thus needed sporadically. But, because she had class and before she would dash out into the night, she would stop by the bar and spend a few happy moments with her Generalissimo, or legit sugar daddy, we all loved her and had no reason to destroy her happiness.

Why don’t we have a TV set in the bar? We could watch Gina on SNL? I asked once, showing my ignorance in all things New York.

But, being a quick learner, I did make progress fast. My only bartending Saturday went incredibly smooth. Long Island Ice Tea was the favorite drink that early summer.

My only problem was ounces.

How much is an ounce?

I knew grams, but not ounces. Luckily, a kind soul, a woman as old as Generalissimo, who could only tend the coats and start drinking very late in the night, showed me the shot glass and told me that it held 1.5 ounces.

I discovered I had real talent in mixing drinks and charging people the right amount of money. I even remember that a patron wanted an Irish Catholic,

But most of my memories are about sailors. They came in. They were young and brazen. They wanted a quick date and a fast drink. Some said they could not afford to pay for their drinks. Some left a quarter of a dollar as tip. Others were just looking pretty in their white uniforms.

The bar was so full of people. Beautiful women whose faces were so smooth that no whiskers could have been seen or felt. Ugly women who could not care less about shaving, but loved a glittery dress and a bright shade of lipstick.

Everybody was vivacious and wanted a piece of the world.

Nothing held back anybody in that time of my youth. The only limits were those of our imagination.

When we got ready to close, the only people left were the few close friends of the Generalissimo and us, the working bees. It must have been 3 am. No one was going to be asleep in Chelsea for a while. Still there was no other way to part but saying: