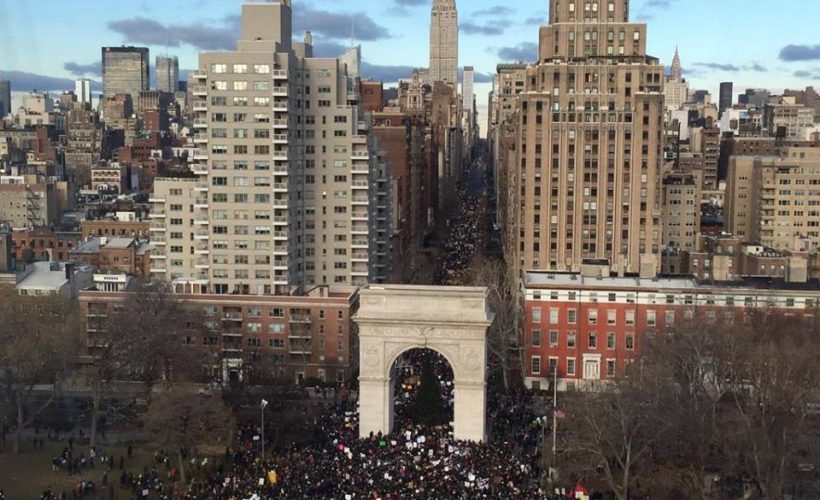 Garner, a 43-year-old father of six, died in July after police officers attempted to arrest him for allegedly selling loose, untaxed cigarettes in the Tompkinsville section of Staten Island, a NYC borough.

In cellphone video of the incident, Pantaleo, who is white, is seen placing his arm around Garner’s neck in an apparent chokehold and then taking him to the ground after Garner refuses to be handcuffed.

Garner, who was black, is heard saying repeatedly, “I can’t breathe!” He died a short time later.

Staten Island District Attorney Daniel Donoval said the grand jury found “no reasonable cause” to bring charges against Pantaleo. Twelve of the 23 jurors needed to be in agreement for any charges to be filed.

Since the grand jury decided not to charge Officer Daniel Pantaleo in connection with Garner’s death, on December 3, demonstrations have been taking place in New York City and around the country demanding justice for minorities. No demonstration demanded better life conditions or just health care for minorities, or for everybody living in squalor.

The demonstrations stand proof that Americans are boiling with anger, but that they are not willing to act. These demonstrations, like Occupy Wall Street are just ways to let the steam off, so no real change can be achieved: diminishing the gap between the haves and the have-nots. Garner was selling cigarettes in the street, because he could not find a better job. The NYPD targeted him because he was an easy target.

No one talks about real problems in America. But we do engage in charity, because demonstrations are societal charities to prove that democracy works and people’s voices are being heard.

Today’s March was an organizing success. Tens of thousands of people marched from Washington Square Park on Fifth Avenue up to 14th Street and then on Sixth Avenue up to Macy’s and back downtown to NYPD headquarters. In addition to making their anger heard, the marchers want the creation of a new institution to deal with cases of police brutality and police homicide, the creation of special prosecutor’s office. 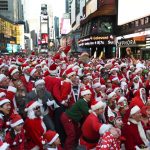 Also today, Santacon returned to the streets of New York, with thousands donning Santa suits for the annual booze-and-Christmas-cheer-fueled bar crawl. After staging the core Santacon gathering in Times Square, the Santas strolled to bars in the area around midtown Manhattan, for  charity money raising and Christmas commercialization critiquing and drinking and oh, later, vomiting.

What did not happen today in NYC was remembering the 13 years of killings and torture Americans have been perpetrating since September 2001 in retaliation for having been attacked by a group of Muslim fundamentalist sponsored by USA’s biggest Arab nation supporter. Also, no one protested the CIA-led tortures, publicized a couple of days ago.

Since December 10, I was expecting something along the lines:

“The US is sure to face protests both at home and abroad after the Senate intelligence committee published its report on the CIA’s use of torture on prisoners,” Colonel Ann Wright told RT, saying the next step for Washington should be accountability.

Nothing has happened since the horrid revelations. And I cannot explain it unless we can say that Americans have no empathy unless they see the death taking place on the web and the death occurs in their backyard, and then the family of the victim can march with them. Oh, and they can ask for some individual retaliation, like punishing the NYPD officer who, obviously did not mean to kill Garner, only to hurt him, but the CIA, an ideological institution, despite being a bunch of old cowboys sitting around the fire, spitting chewed tobacco, and devising how to torture people, they go unnoticed.

Maybe Americans do not get revolt. Maybe I do not get Americans. But I surely do like Santa very much.