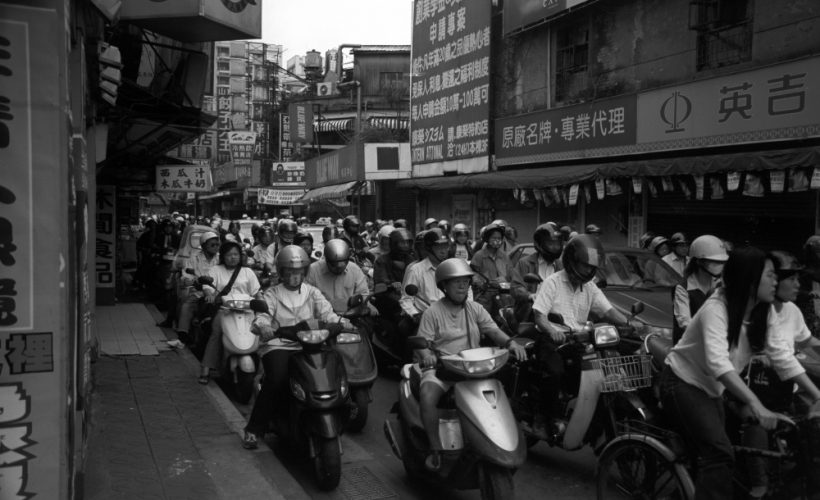 It’s not 8:30 am yet. We made it outside our apartment building.

Lola points out toward the stretched white limousine I’ve noticed being parked in front of my building, on Avenue A, for a while now. She escapes me crossing the side walk away from me. She’s a sneaky two-and-a-half-year-old toddler.

Lola stops and holds her arms up toward me so I can pick her up.

I am torn apart between Lola’s wish to be carried and my wish to be noticed as a proper girl or as what I think a proper girl-woman should look like. I try to watch my posture while I bend to pick up Lola and carry her in my arms. I love Lola and I find it difficult to explain to her that.

That stretched limousine is my morning star.

Deep inside I have this knowledge that either Marty Scorsese, Woody Allen, or Andrei Şerban (Andrei because I have some patriotism left in me)  is relaxing inside that limousine either smoking a cigar and drinking an espresso or eating a Russ & Daughters bagel with Irish lox or perhaps just biting his nails, but definitively waiting to find … me!

“Mommy, why are you so slow?” Lola asks and I realize that I am still bent trying to pick her up.

I ignore Lola’s question. I pick her up and breath.

If  Marty Scorsese were to open that door to ask me to come in I’d stop for a moment and watching him in the eye I’d ask in my best DeNiroesque voice,

“You’re talking to me?” Then I’d laugh and I’d continue walking as if I did not care who he is.

“Mommy, you are holding me too tight. It hurts.” Lola complains.

I adjust my tightness and I cross the avenue. My head is still turned north toward the limousine. I think it is safe to cross. It is early enough in the morning for taxis to be rummaging around the city.

If Woody Allen were to open the door of that limousine to ask me whether I have a moment to spend with him, I’d answer,

“Sorry, but I have to council a group of chronic masturbators”, and if I’m late they’ll start without me.”

I smile. Every time I imagine this scene I smile. I know that I could really nail it down to perfection. Except for the smell of lox. It can nauseate me sometimes.

“Mommy put me down please.” I put Lola down and taking her hand I pull her behind me. I am still fixated on the car.

Imagining my reaction to Andrei Şerban has always taken me almost the whole trip to Lola’s day care. He’s more difficult to grasp because while he loves loves flamboyance (and we do live near La Mamma, he also loves being incognito. The incognito Liberace. I still remember his direction of Hector Berlioz’ “Benvenuto Cellini” for the Met. A sort of little disaster.) Furthermore, Andrei is the only one with whom I had a short-lived interaction with him. I left a message once on his home phone answering machine.

A few months after my arrival to the promised land, NYC, I had to write back home what I was doing in the Big City. I had nothing to write about except that I was taking acting classes for which I was paying by cleaning the studio. So one day I called  411 and found his number and I left a message on his machine.

I hung up and I finished my epistle for my Romanian friend: “by the way,” I wrote “I just talked to Andrei Serban and he is going to see whether he can cast me in his next production.”

This happened so many years ago.

“Mama, juice. I want juice, mama” Lola brings me back to today.

We are a block away from the limousine. I cannot keep looking backward. I almost dragged Lola into a window.

“Lola, wait, please. We’ll reach your day care in a minute, and I’ll give you your cup there.”

“No mama, now!” Lola is loosing her composure.

“Hold your ponies, Lola” I tell her in an attempt to make her forget about the juice.

My attempt to control her tantrums fails.

I have to bring my head into the forward looking position. Then I start searching her back pack for the juice.

I bring Lola to the Village Day Care, on Avenue A between 2nd and 3rd streets, which usually is very convenient because it is on my way to the subway. I can take either the 2nd Avenue subway stop or the Broadway Lafayette B or D.

My office is midtown. I take the F train to Radio City Hall/Rockefeller Center at 47th and 6th Avenue. 630 6th Avenue or 1 Rockefeller Plaza, 9th floor. I am a paralegal for a chronic masturbator: my friend Bill. Bill is everybody’s friend.

“Otherwise do you think I would have hired you? Most of the time your work is sub par”.

He thinks “sub par” is French. He graduated from NYU Law School in the early 80s. Which means NYU was not what it eventually became. Or, if you went then to NYU, you were not what today’s students are.

We see some friends of Lola’s. She wants to run toward them. I close her backpack. I let her run and I turn my head back toward the limousine.

If Andrei Serban were to open the door of that limousine his pick up lines would be a reading.

“You have come to see me, haven’t you?” he would rhetorically ask me while opening the door to his limousine and inviting me inside.

“No, spirit of evil and lord of the shadows,’ I would reply with a hostile glare treating him as if he were Bulgakov’s Woland. I am well read.

“Well, tax-gatherer, if you’ve come to see me, why don’t you wish me well?” he would continue imperturbably.

“Because I have no wish to see you well,” I would say impudently reading from an English translation of The Master and Margarita as I do not speak Russian.

“Then I am afraid you will have to reconcile yourself to my good health,” would retort Andrei.

“Shadows are also cast by trees and living things. Do you want to strip the whole globe by removing every tree and every creature to satisfy your fantasy of a bare world? You’re stupid.” I would then say.

He would not smile once. During all this time his face would be so marble like that I would be transfixed by it.

For some strange reason I actually understand what it means. It is the Russian version of “never talk to strangers.”

I see Lola embracing her little friend Laly. I approach Laly’s mom and we exchange a polite nod. Then Lola turns to me and says: “Good bye and good night mommy.” She laughs and runs inside the school.

I continue my trip to the subway. At the corner of 2nd and 1st Avenue a hand hands me with a blue flier in front of my face. I take it, open it and read it.

I skip down the page and read the dates:

All dates when I am unavailable.

I take the flier, I fold it and put inside a book I am reading on the subway. “Sweet Sunday” by a Brit who, like me, lived for a while in New York and, unlike me, thought that NoHo’s as old as SoHo. I hear the train. I hurry and think about the protest.

Another good thing that I will not do in this lifetime.